I wasn’t looking for an apprentice….. but earlier this year I just happened to be in Sydney and at a loose end, which enabled me to catch up with a friend unexpectedly. She went on to introduce me to a friend of hers and asked if it was ok for her friend to ask me “a few questions about my job.”

It was immediately apparent to me that her friend was someone very special. She was beautiful. Tall, dressed in black with an amazing mane of hair, high cheekbones and an air of mystery about her; but what really impressed me was her air of contained inner power. It also became very quickly obvious that she was quiet, thoughtful and observant. 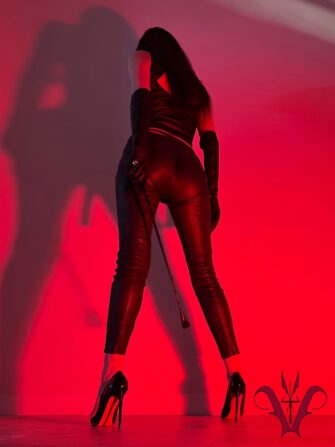 Miss Vivienne went on to very respectfully ask me a series of well thought out questions about life as a ProDomme and towards the end of the conversation, I invited her to join me to observe at the dungeon so she could learn more about exactly what professional domination sessions entail.

I’m used to seeing big reactions when people first enter Mistress Servalan’s amazing Carisbrook dungeon space and Miss Vivienne’s was no exception. She was simply DELIGHTED at first impression and more and more so as I showed her around and the possibilities of the space became apparent to her.

Over the last few months Miss Vivienne Valkyrie has gone from being an enthusiastic observer and sadistic cheer squad to a very active participant in session as her skillset has grown. Aside from the experience she’s gained in session, she’s been actively studying and practicing at home.

At present Miss Vivienne is confident with and enjoys: – corporal punishment, strap-on play, humiliation, cross dressing, basic to medium level bondage, mummification, and CBT, including ballbusting. She also has long, beautiful nails with which she loves to scratch slaves.
Miss Vivienne would like to further explore her interests in knife play, puppy play, medical play, piercing and chain bondage. 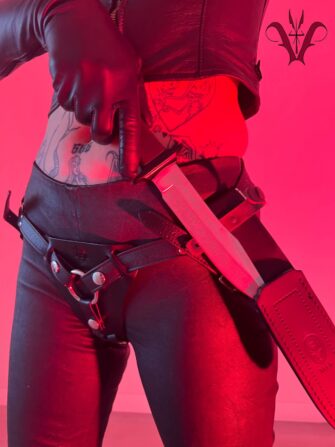 Miss Vivienne brings a very glamorous, sexy presence to the dungeon. She is observant and intuitive with a strong sense of fun. While sadism absolutely lights her up, she is also caring and genuine.

“I’ve been lucky enough to have seen Miss Vivienne in two different contexts. One has been more deliciously painful than the other. This was as a trainee domme with Mistress Jadis for a ball-busting session. All I can say is Wow! Within moments I knew what the balls were in for. The force of the kicks, knees and punches! Nothing was held back. But even more important in confirming the arrival of a true ball-busting sadist was the barely contained happy dance of excitement before each kick!

“The other occasion was when Ms Jadis lent me to Miss Vivienne to assist with an event she was holding. This was a huge privilege, and for me, two things stood out. Firstly how safe she made me feel as an exposed slave in an unknown setting. The other was how easily and naturally she took control of me while I was on loan – snapping the padlocks closed on the collar and ensuring I was useful. And as the evening finished, releasing me, thanking me, and whispering “When I next see you I’ll kick your ball … very hard!”. What perfect thanks to her slave for the night.” Adam4Cbt

“Miss Viv has been an amazing addition to the kink world. She is smart, beautiful and very perverted! I had the privilege of having her in my session with Mistress Jadis a few times now, and I can tell you -“ she has it”. 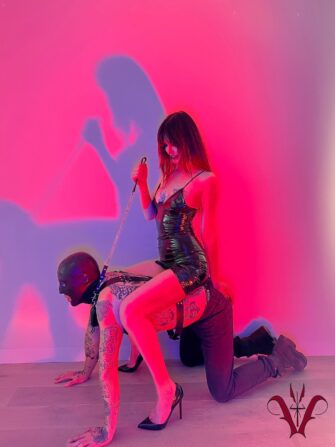 At present, Miss Vivienne Valkyrie is available to join Mistress Servalan or me in session for a small additional fee. She has some exams coming up, after which she will be able to conduct light/medium sessions in her areas of interest solo. If you’re interested in following her journey, Miss Vivienne has a twitter account which can be found here.